On the meaning of life

Sometimes when you’re busy going through the repetitions of daily-life, you stop to ponder over the existential questions. Why are we here? What is the meaning of life?

It might seem anything from overbearing to comical based on the kind of person you are. In most cases, you conveniently ignore it because the pursuit seems too daunting to follow. You get back to the drill and life goes on.

When it happened to me recently, I didn’t shrug it off. I had been wanting to explore philosophy for some time now because I needed to find answers to some very fundamental questions. Understanding the meaning of life, our place in the universe and the ultimate consequence of our actions is important for deducing what makes a good life—what are the things that truly matter.


I started with reading about the different schools of thoughts that have tried to formulate an answer to these questions. I then took a first-principles approach to come up with the following framework for exploration:

There are three distinct yet sequentially interrelated questions here and each of them needs an independent analysis of its own.

The repetitions exist and baring the few who commit suicide and willingly decide against going through these repetitions, the majority repeat the pattern every day. There must be a strong underlying reason for it to be worth going through. I first examine why suicide is not an option. Once that is established, I figure out the meaning of life and explore the question of transcendence. I hope the answers will then help me in thinking about life from a perspective of optimising for what matters the most.


But before I proceed, here are some insights that I had which are important to take note of:


Why is life worth going through?

This question can be answered by the elimination of the only other alternative to life—wilful death or suicide.

There is but one truly serious philosophical problem and that is suicide.

The philosophical arguments are predominantly against suicide. I didn’t find the few that were for it to be reasonable enough to hold their grounds.

Stoicism accepts suicide as being ethical under extreme circumstances and given that it is a very old branch of philosophy, these circumstances such as the risk of becoming a political pawn or a slave and being weak and dependent on others are not common reasons of suffering for people today.

There are some other ideologies which support suicide in the case of a painful terminal illness or an unfortunately hard situation with no possibility of escape such as concentration camps. But existentialism and absurdism have befitting counters to this.

The existentialists believe that we have the power to give meaning to our lives and hence any experience whether positive or negative can be attached to a specific meaning which in turn should make life worth living.

A definitive book that formed a very positive view for me on this concept was Man’s Search for Meaning by the Austrian psychiatrist Viktor Frankl. He was a Jew who survived the inhuman treatment at the Nazi concentration camps using this philosophy. Building on the hugely popular quote by Friedrich Nietzsche—"He who has a why to live for can bear almost any how", Frankl says that man’s deepest desire is to find meaning in his life and if he can do that, he can survive anything.

His philosophy is the basis for a psychotherapy technique called logotherapy that he devised. It proposes that one can find meaning in three distinct ways—through their work, through their relationships and one’s attitude towards unavoidable suffering.

While the first two ways are easier to make sense of, the third one intrigues me the most because it is a direct counter to the most common reason for suicide—unavoidable suffering.

He talks about embracing suffering. There are situations where one just can’t escape it but the attitude that one chooses to exhibit is very well within their control and that can make all the difference. He is living proof of using this philosophy to survive possibly the worst kind of suffering meted to mankind at the concentration camps. This gives it a huge amount of credibility.

Albert Camus, the Algerian essayist and philosopher who proposed the theory of absurdism, discusses suicide at length in his essay "The Myth of Sisyphus". His concept of the absurd solicits people to accept the inherent lack of meaning in life and instead rebel by rejoicing in what life does offer. He says a lot of important things which seem insightful and convincing but here are two particularly important quotes:

In a man’s attachment to life there is something stronger than all the ills in the world. The body’s judgment is as good as the mind’s, and the body shrinks from annihilation. We get into the habit of living before acquiring the habit of thinking. In that race which daily hastens us toward death, the body maintains its irreparable lead.

People don’t commit suicide because our instinct to live is stronger than that of suicide. It is because we are forced into these repetitions before we develop the habit of thinking for ourselves. But even then, man’s will for living and the attachment to life with consciousness can help overcome the most difficult conditions.

He then goes on to suggest a way to live.

Thus I draw from the absurd three consequences, which are my revolt, my freedom, and my passion. By the mere activity of consciousness I transform into a rule of life what was an invitation to death—and I refuse suicide.

By revolt, he means the refusal of suicide and the act of challenging life for the search of meaning while knowing that it doesn’t exist.

Freedom for him meant the idea of experiencing it by thinking and acting in any way that one chooses. By abandoning the idea that there is some role to fulfil, by living life in the moment without any preconceived notions.

And passion symbolises the living of a full life. It draws from the fact that since there is no inherent meaning in the things that we do, we can’t say qualitatively that an experience is better than the other. Living with passion is about having a wider range of experiences.

What is the meaning of life?

A belief in the existence of God is the panacea for almost all metaphysical problems. I am not an atheist, I believe in God to some extent but more importantly, I believe in the power of belief. But when seeking these philosophical answers, I wanted to examine arguments by keeping the theological aspects out of it because that meant having more wholesome and logical answers.

The view that I find most relatable then is that there is no intrinsic meaning in life and the universe. This table from Wikipedia that perfectly juxtaposes the differences between the different theories concerning themselves with the meaning of life.

While starting with a bleak premise, existentialism’s idea of free will where individuals can create their meanings lends it hope. Absurdism, on the other hand, paints a difficult picture of life as we see it. However, it is the most logically sound philosophy in my opinion. The thing that I like about it is that it recognises that the search for meaning is absurd because it is a meaningless universe.

I wanted to examine Camus’s views on living life to have some actionable insights into what people with the realisation of the absurd do. To understand that, I read his novel ‘The Stranger‘ where the protagonist Meursault exhibits behaviours of a man faced with the absurd. He is an unassuming person who seems detached and takes things on face value. It is a beautiful alternative perspective on living and most of it is quotable but for the sake of representation, here are three instances where we get to see Meursault’s reaction to the absurd.

I have fixed up with my employer for two days’ leave; obviously, under the circumstances (his mother’s death), he couldn’t refuse. Still, I had an idea he looked annoyed, and I said, without thinking: “Sorry, sir, but it’s not my fault, you know.” Afterwards it struck me I needn’t have said that. I had no reason to excuse myself; it was up to him to express his sympathy and so forth.

“You’re a young man,” he said, “and I’m pretty sure you’d enjoy living in Paris. And, of course, you could travel about France for some months in the year.” I told him I was quite prepared to go; but really I didn’t care much one way or the other. He then asked if a “change of life,” as he called it, didn’t appeal to me, and I answered that one never changed his way of life; one life was as good as another, and my present one suited me quite well.

Marie came that evening and asked me if I’d marry her. I said I didn’t mind; if she was keen on it, we’d get married. Then she asked me again if I loved her. I replied, much as before, that her question meant nothing or next to nothing—but I supposed I didn’t. “If that’s how you feel,” she said, “why marry me?” I explained that it had no importance really, but, if it would give her pleasure, we could get married right away. I pointed out that, anyhow, the suggestion came from her; as for me, I’d merely said, “Yes.” Then she remarked that marriage was a serious matter. To which I answered: “No.”

He didn’t feel any negative emotion when his mother died. He liked the mundane—his routine was his sanctuary. He is indifferent about marrying the girl he was seeing. He exhibits a complete lack of remorse when undergoing trial for killing a man. These are extreme stances by normal societal standards and he faces the consequences of the same as the story unfolds.

This enforced the conclusion that although logically sound, adopting absurdism completely is not a pragmatic option. So where does all this leave us?

It struck me that I was being very parochial in my approach to finding these answers. I decided to step back and look at the bigger picture because this discovery can’t be done in isolation by only considering philosophical arguments—life is much more than that. This left me with the following three points to consider:

Expanding on these ideas, here is what I concluded:

What does it transcend to?

This is probably the easiest question to answer. The theological constructs of karma, heaven and hell are useful for people who believe in God where afterlife can be considered. But for all other purposes, life ultimately transcends to nothingness. That is a hard fact.

What does it mean for our reality? Most of us will eventually be forgotten within a couple of generations. Some of us who can build history-defining legacy might stay relevant for a few centuries. It is a highly improbable event though. Of the billions of people walking the planet, the probability of us becoming something like Newton, Alexandar or Shakespeare is practically 0.

This treatment left me sufficiently satisfied for what I think should be the takeaway from this exercise and here is the synthesis of everything that I have assimilated so far. 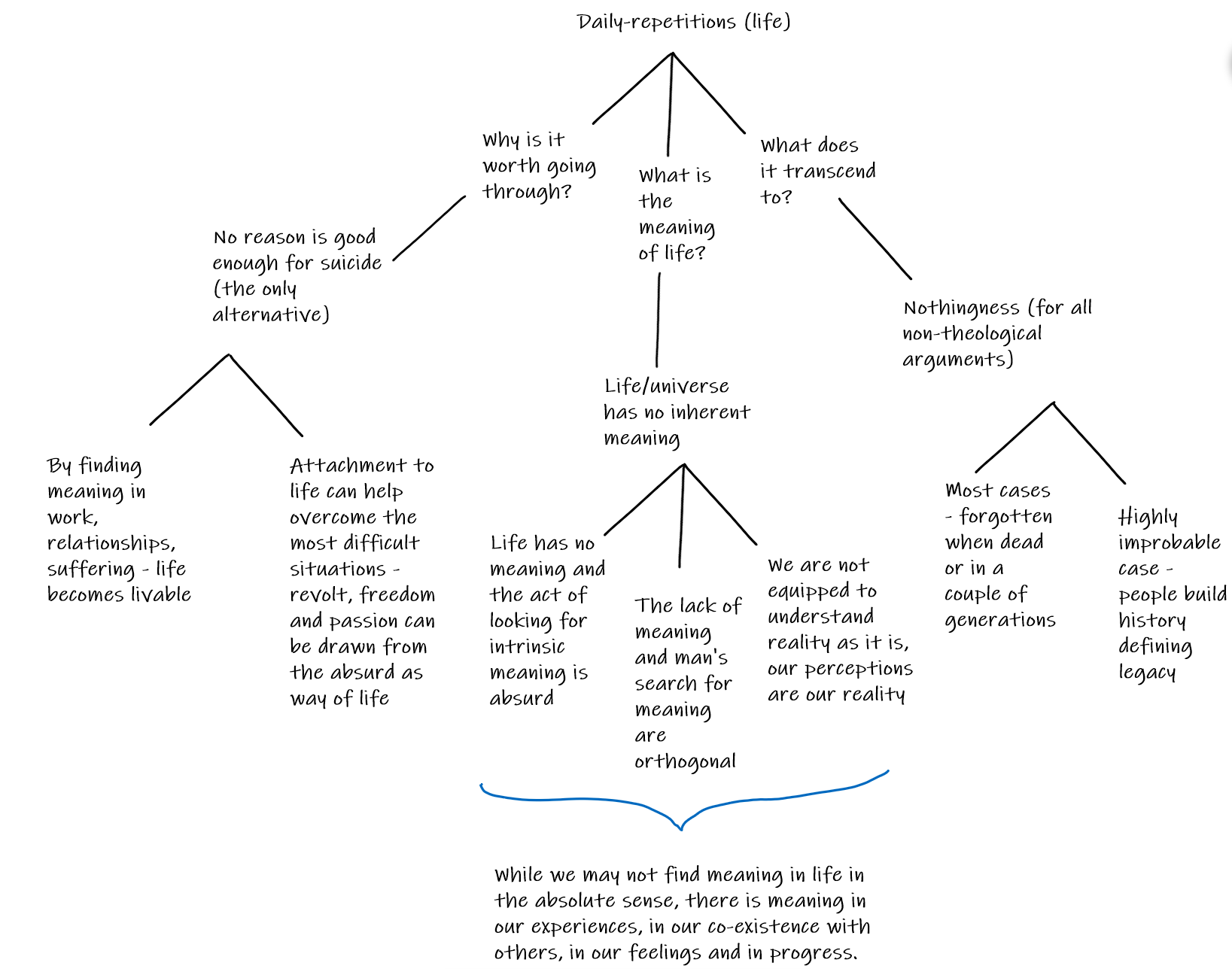 As I mentioned earlier, this understanding is the bedstone for defining a good life, realising what truly matters and how we should be optimising for that. It will be another long and exciting process of discovery but it is a thought for a different day.